Yellow is Forbidden is at the NZ International Film Festival in Auckland and 12 other locations.  If you are in Auckland – at the first two NZIFF screenings (both Civic Theatre) screenings will be followed by a Q+A in the Wintergarden.

“In Guo Pei she meets a subject fit for the times. The contemporary hankering for imperial grandeur may never have looked more insanely magnificent than in Guo Pei’s world of wearable arts. Its roots in suppression, aptly alluded to in the film’s title, are astutely observed in Brettkelly’s fascinating, gorgeous film.”
….
“With a remarkable eye for detail and exquisite blending of visual art forms, Pietra Brettkelly captures Guo’s drive, artistry, meticulousness, and acumen.” — Brian Gordon, Tribeca Film Festival

The Herald said
4 out of 5 stars NZ Herald

Our picks from this year’s New Zealand International Film Festival line up Denizen.

Yellow Is Forbidden
From New Zealand director Pietra Brettkelly, this documentary explores the luxurious world of Chinese designer Guo Pei (best known for designing the yellow dress Rihanna wore to the Met Gala in 2015) as she strives to be recognised by the gate-keepers of haute couture and prepares for her Paris debut. For screenings and tickets, click here. 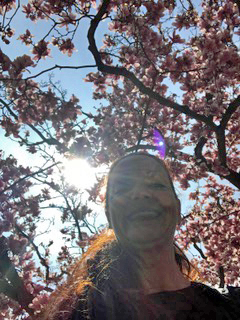 En route to my film’s last screening at Tribeca Film Festival in New York I walked through the spring of Central Park. And a little boy came to show me the mosquito he’d caught, in a jar, that he was feeding a tulip flower.

I asked him to take my photo with the blossoms. And while his skills being able to capture alive other species is questionable, I think the kid has a certain appreciation of chiaroscuro as you see in the photo attached….

And now in the beauty of home, an autumn swim and distilling the last month of YELLOW IS FORBIDDEN’s world premier, then Hotdocs Documentary Film Festival Toronto, my genre home and then to the inspirational and crazy Cannes Film Festival.

It has been magical and I thank you all truly for your enthusiasm for my film, your kindness to me and your dedication to helping me continue in this extraordinary filmic life.

For all the fabulous reviews and articles, and information on future screenings go to the film’s facebook page… https://www.facebook.com/yellowisforbidden/ 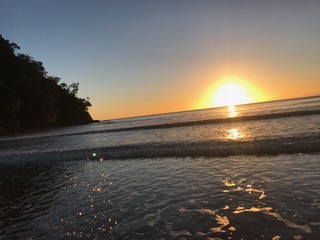 “Yellow is Forbidden, has just become the first New Zealand film to screen in competition at the prestigious Tribeca Film Festival in New York.The documentary focuses on the extraordinary story of Chinese fashion designer, Guo Pei, the daughter of a communist soldier and a teacher, who counts Rihanna and Beyonce among her clients, and attempts to join the ranks of France’s elite world of haute couture. Pietra Brettkelly talks with Kathryn Ryan about story telling and her fascination with the world. Yellow is Forbidden will premiere at the New Zealand International Film Festival in July.”

“A new film by New Zealand film maker Pietra Brettkelly chronicles the life and work of fashion designer Guo Pei – it’s called Yellow is Forbidden – currently in post production. Guo Pei – whose clients include Beyonce and Rihanna – is based in Beijing and Paris. Pietra is fundraising to finish the film.”

‘Yellow is Forbidden’ is in post production now. Radio New Zealand featured the film over the weekend. Listen below.

How You Can Help – Boosted

YELLOW IS FORBIDDEN was an extraordinary film to shoot and edit. As with any creative venture, there must be difficulty – ha! – and that has been in the funding.

I’ve managed to raise nearly half the budget, but I need your help to cover the fine cut of the film, the composer, archive, colour grade, sound mix and deferred fees.

The great thing about Boosted is that NZ donors can claim 33% back on their tax return. So if you give $100 you can claim $33 back!

I’m needing more than $20,000 but am truly grateful for anything. Boosted is an all-or-nothing platform meaning that if I don’t reach the target of $20,000 in 30 days your donation will be refunded.

My overseas friends, Boosted is in New Zealand dollars – $1NZ equates to about .75US cents. But if you would like to donate US$1000 or more let me know as there is a similar US charitable organisation that operates for such donations.