Soundtrack – the art star and the sudanese twins 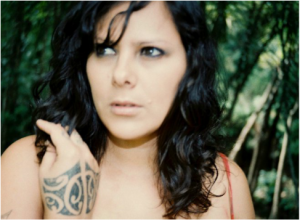 The soundtrack composer of the art star and the sudanese twins was 27 year-old singer songwriter – Anika Moa.

There isn’t a voice like hers anywhere. Honest and heart wrenching with an underlying soul and energy that complements the songs she writes.

And knowing this Pietra is so humbled that Anika has written the soundtrack for The Art Star and the Sudanese Twins.
As a 19 year-old Anika Moa became the first New Zealander signed to an international record label without releasing anything at home. Atlantic Records flew her to New York in 2000 to record her debut with reputed producer Victor Van Vugt (PJ Harvey, Nick Cave). Anika’s strong will and desire to stay true to herself and her musical path led her to chose a career at home rather than a two year touring schedule through the United States.

And to writing the soundtracks to seven of Pietra’s last documentaries.

Anika says when she first saw this Pietra’s latest documentary she thought Vanessa’s art was incredible and that she understood her. Watching the film it started to trigger ideas and Anika says she wondered what the sounds of Sudan were like. And felt like.

“I know the sounds of a city – grating, electronic, piercing, shuffled. I imagined the south of Sudan being so so sad but with a great deal of hope for the future too.”

Anika’s aim was to draw the emotion of the viewer, to take them deeper inside Vanessa’s complicated and complex world.

And now that the soundtrack is complete, as most artists Anika grapples with the final result. “I don’t know, its okay I guess.”

For more on Anika Moa, her music and her life