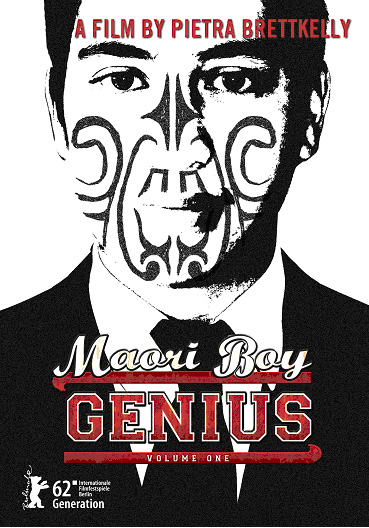 “He’s precious, and gifted, a Matakite – a wiseman… but really he’s just a child.”

At 4 he learnt English.

At 12 he began his first university degree.

At 14 he googled international politics and came up with Yale University.

Ngaa’s story reveals a family of eight on a modest income, committing to a US$35,000 Yale bill; a weighty tribal expectation that he will be the voice of his people AND bring success in war dance competitions; laughing and crying with best friends, approaching adulthood and diverging pathways.

What if we could turn back the clock and watch the minds forming of those who would create political zeitgeist shifts in the future?

MAORI BOY GENIUS does just that. 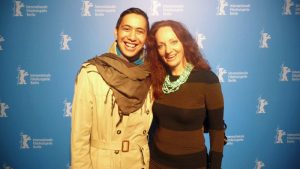 As she was preparing to have her sixth child the mother in our film, Maakarita, tells us a story.  Sixteen years previously she was giving birth to her first child, a boy.  And there wasn’t just one omen with his birth, but two.  Firstly he was born “in the caul” with the amnio covering his face, and when the old ladies went outside to announce his birth there was a double rainbow on the horizon.

He learned to memorise through the Māori tradition of singing and story telling.  His first language is Māori and he learnt English at four years old.  At 12 he began his first university degree; at 14 he googled “international politics” and “education” and came up with Yale University.  He applied to the Yale summer semester programme at age 15 and was accepted at the age of 16.

Ngaa says: “Māori didn’t have a written language.  So we learn songs, we learn dances about everything like fishing.  How can you go fishing if you don’t know where the fish are?  A song will tell us how to look for the fish and we would sing it as we went fishing.”

Ngaa posseses spirituality and charisma.   Among his people he is being hailed as a new leader for this confused and troubled age, a visionary who can directly tap into the wisdom of his ancestors.

He’s also a goofy, gangling 16 year-old Māori boy who loves to hang out with his mates; watching his best friend Riwai –  already a dad at 17 –  practise his old school popping-and-locking dance moves, eating meat pies in his friend Daniel’s car.

“But his real interest is human rights,” his mother Maakarita says: “He’s been talking that way since he was 10.”

Ngaa’s name is based on an old tribal (Tuhoe) saying: “He uira ki te rangi he tauira ki te whenua….Like lightning in the sky, here is an example on earth.”

But it is Ngaa’s grandmother who gently notes: “He’s a Matakite, a wiseman.  But really he’s just a boy.”

MAORI BOY GENIUS profiles this future leader as he takes his first steps toward breaking the mould, railing against his people’s horrifying statistics.  This is the classic story of poor small town boy makes good, the greatest story ever told, that of rags to riches.

Ngaa was born in the small coastal New Zealand town of Otaki.  He has lived with his retired grandparents (his grandfather worked on the railways and his grandmother a prison nurse) since the age of eight (customarily the eldest child in a family is given to their grandparents) while Ngaa’s five siblings were bought up by his parents.

Ngaa Rauuira’s closest and most spiritually rich relationship is with his grandfather.  His grandfather is sad when he admits he has lost the language that was beaten out of those of his generation when they spoke it in the school playgrounds.  The culture was being crushed.  But in the 1970s people marched on Parliament, insisting the culture and language be protected.

Some say Ngaa Rauuira is one of the greatest results of this renaissance, a product of a unique full immersion indigenous education system that aims to assist New Zealand into a bicultural society.

But expectations are high of Ngaa Rauuira; he is a young man with the world resting on his shoulders.  His family of eight faces his US$35,000 Yale bill; his tribe expects success in kapa haka performance competitions AND in ‘saving’ them; he cannot fail.

Because of Ngaa Rauuira’s age he must be chaperoned at Yale University.  Although he lives with his grandparents, it is his father Adrian, thunderstruck by the wonderment of his son’s talents, that is his companion.  Both leave their family behind, Adrian’s wife Maakarita having just given birth to their sixth child three days before departure, the whole family having sacrificed so much for this boy’s education.

As we watch all these influences on Ngaa Rauuira, we see him begin to make his own decisions and take his first political steps.  On his return from Yale Ngaa Rauuira takes up a megaphone and leads national protest.  He is then asked to stand as a Member of Parliament.  The political party have no idea how young he is.  Just how inspiring.

Within the year, MAORI BOY GENIUS reveals the empowerment Ngaa Rauuira got not just from those around him but an international educational institution.  This truly is Volume 1, the 7Up of the making of a political leader.

As a documentary filmmaker I hear or read of things that interest me and it might be months or years later that I’m given the opportunity to explore that idea in film.  I wait – subconsciously – for the right subject to come along.

I once heard that when we are 16 we begin to realise our own political views, that this is the year we become cognisant of the society around us, of differences in the lives of others.  And we begin to become aware of how we can impact that – through our own voice be it writing, discussion or public protest, and in a democratic society like New Zealand by realising that in two years time at the age of 18 we can vote.

Truthfully when I was 16 my focus was the beach where I lived and volleyball tournaments.  And in a recent international survey teens voted spray-tans and iPhones as the top inventions of all time.  Are they really becoming politically aware?  And if I was to explore this political coming-of-age did I really want to be hanging out with teenagers, sometimes monosyllabic moody individuals?

And then I met Ngaa Rauuira who at 16 becomes passionately political.  One look now at his Facebook page tells how he champions the rights of the oppressed including his own people who were ousted from their lands, introduced to cigarettes and alcohol and banned from speaking their own language.

And so we filmed Ngaa Rauuira’s 16th year which evolved into an intense pressure cooker of political awareness – being halted from study as a New Zealand university because of his age, seeking educational opportunities overseas and departing his homeland for study at Yale summer semester – and getting As.  All his previous 16 years of up-bringing and now this international study was percolating in this young mind and on his return to New Zealand he took his first major political steps leading protest marches.  All in his 16th year.

Ngaa Rauuira is an exciting young man who talks in myths and finds his inspiration and direction from his ancestors.   But is Ngaa Rauuira’s biculturalism relevant in the 21st century and will it help or hinder his political development?  Or is he the future leader who can successfully straddle both worlds?

MAORI BOY GENIUS is my third narrative feature after 2003’s BEAUTY WILL SAVE THE WORLD shot is Libya and featuring a beauty competition hosted by Colonel Gadaffi, and THE ART STAR AND THE SUDANESE TWINS shot largely in South Sudan exploring the question Is international adoption the new colonialism?

As a first generation New Zealander, I wonder at the future of Aotearoa/New Zealand, a relatively new country, as we grapple with bi-culturalism and address the racial divides.